Take advantage of the extraordinary opportunity

to watch the intriguing behavior of grizzly bears.

See grizzlies from across their range - we have bears from as far away as Alaska and as close as Yellowstone National Park! Each bear at the GWDC has its own distinct story, but they all have something in common; they came to reside here after becoming nuisance bears or are the orphaned cubs of a nuisance bear. These bears learn to obtain food from people, damage property in search of food or become aggressive toward people and are usually killed. Instead of being destroyed, the bears that reside at the GWDC were rescued, given a second chance and now are ambassadors for their counterparts in the wild. As happy as we are to be able to give these bears a forever home, we want visitors to understand why the bears are here, and how to help make sure that we all do our part to ensure grizzlies can remain in the wild. Please learn from their stories!

The bears have a large outdoor habitat that includes many natural features that gives them a comfortable and stimulating environment to roam in. The animal care staff rotates a combination of bears into the habitat throughout the day. These keepers also hide food in the habitat, stock the pond with live trout and rearrange features regularly. These enrichment activities keep the bears healthy, both mentally and physically, by stimulating the behaviors the bears would display in the wild. These behaviors are fascinating to watch, especially within a proximity that would not be safe with wild bears, so the bears always keep visitors very entertained!

Help Care For The Bears 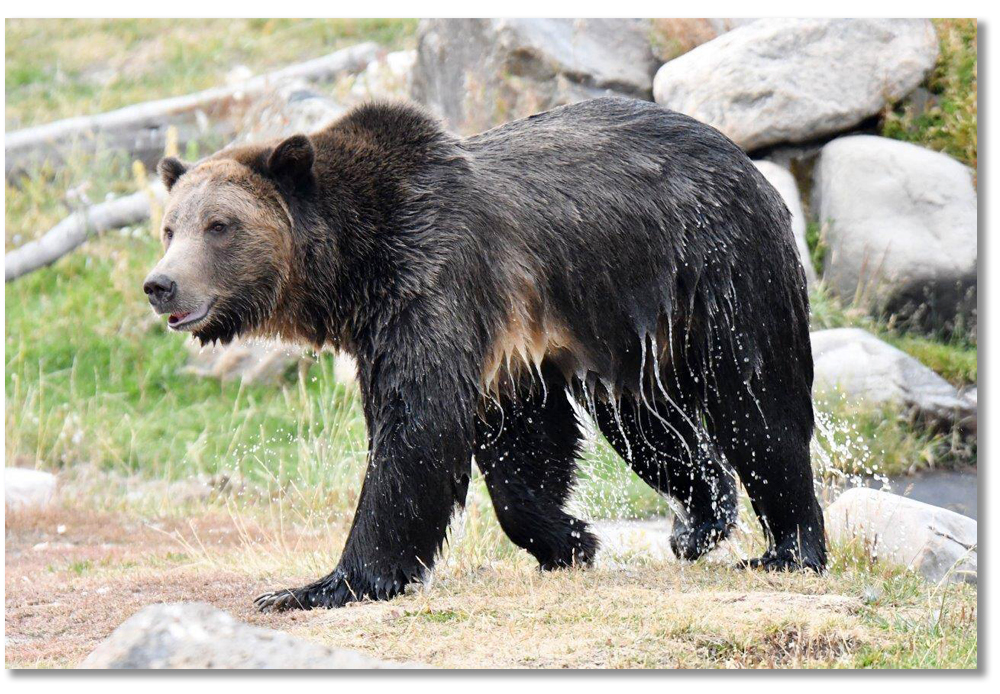 As a four-year-old male grizzly bear, Bo gained access to human food sources near West Yellowstone, Montana in 2020. Beginning with garbage left out at cabins near Rainbow Point Campground, he became confident enough to explore the campground itself. There he fed on food left unsecured by campers, including items from a cooler, in the back of a pickup truck, and inside an unoccupied tent. His boldness escalated to the point that he actually climbed on an occupied vehicle at the campground. After unsuccessful attempts to haze him out of the area, State and Federal Bear Managers decided he could not remain in the wild. On July 6th, we welcomed him to the Grizzly & Wolf Discovery Center (GWDC) as an alternative to a lethal removal. GWDC Staff gave him the name Bo, after RainBOw Point Campground. 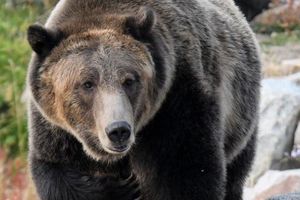 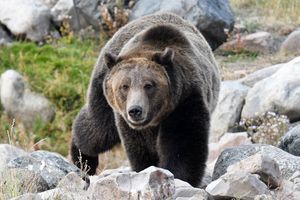 On September 6th 2011, the Center welcomed a new resident bear, Coram a three-year-old grizzly who unfortunately became habituated to human foods and garbage. According to Montana Fish, Wildlife & Parks Region 1, Coram began boldly walking through town and finding non-natural foods from residential areas. He didn’t forget that easy food source. Once he and his family left the den in the spring, he headed right into town again. He was trapped and moved for the second time in May. More reports came in about a bear walking up onto people’s porches and getting into dog food. When it turned out that the three year old bear had been trapped in town a third time, wildlife managers had to face the fact that this bear was not going to learn and would have to be removed from the wild. Coram has adapted well and enthusiastically wrestles daily with Grant. 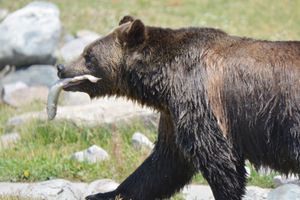 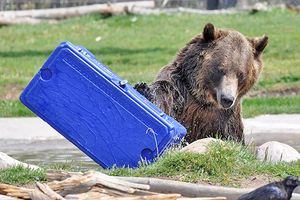 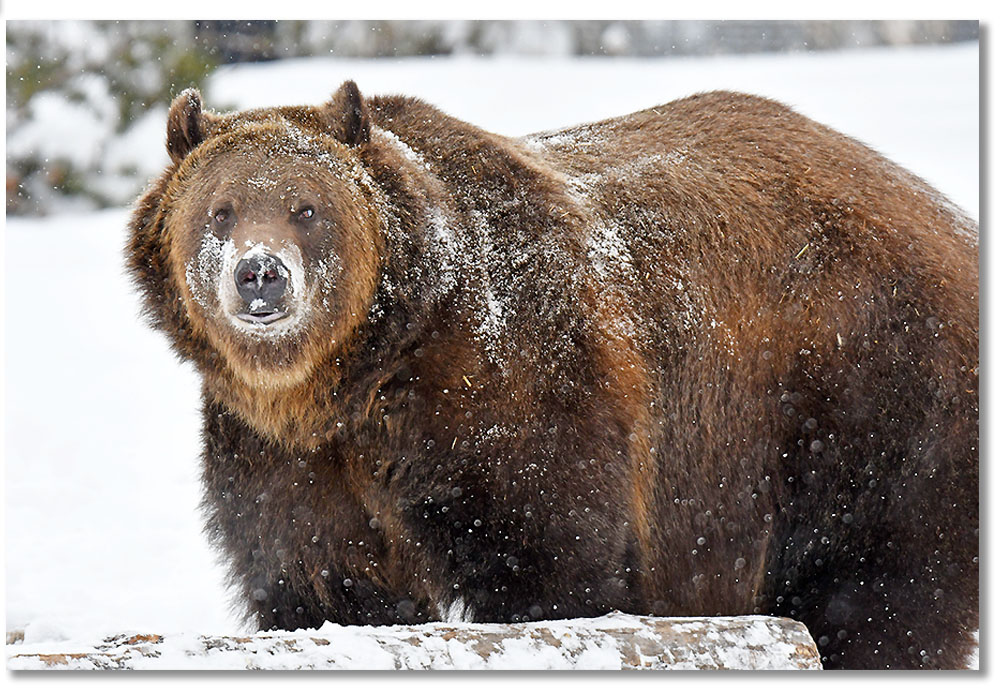 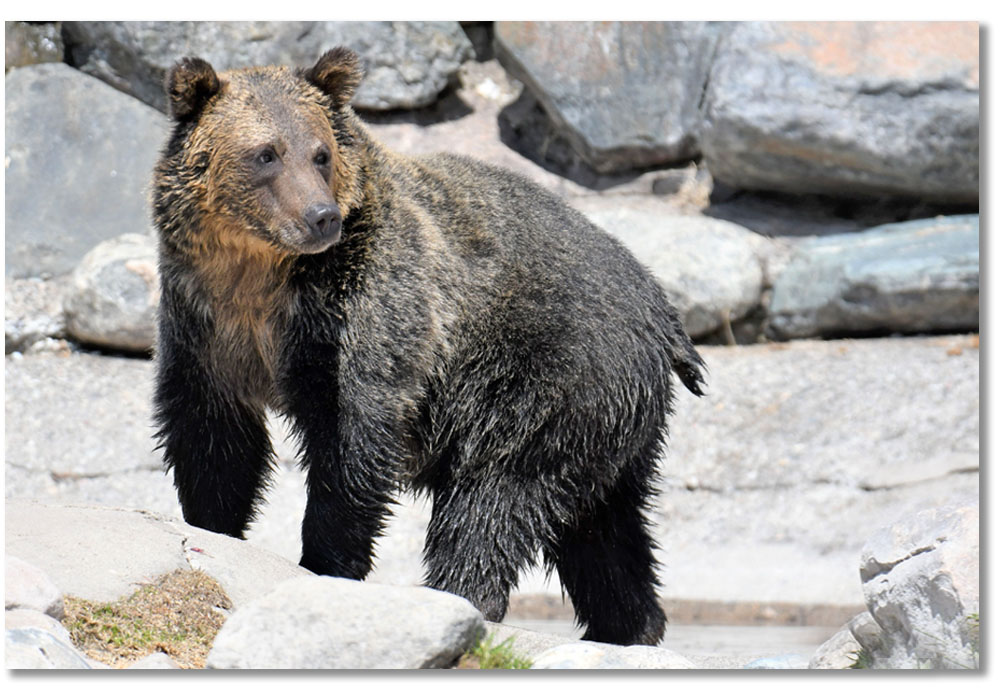 Condi was born in February 2019. She and her sister Seeley arrived at the Grizzly & Wolf Discovery Center in the fall of 2019. They were relocated from the Seeley-Swan Valley in western Montana after their mother had to be euthanized due to food conditioning. Condi is adjusting well to life at the Center and interacts with Seeley in the habitat. 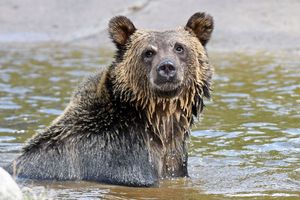 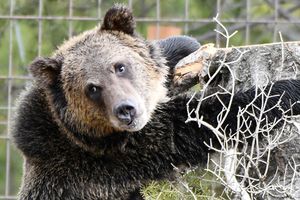 Seeley and Condi, like their mother, learned to look for unsecured human food in rural neighborhoods. Seeley has acclimated well to being at the Center and likes to wrestle with her sister, enjoys a variety of foods and loves the habitat pond. 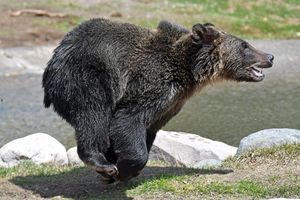 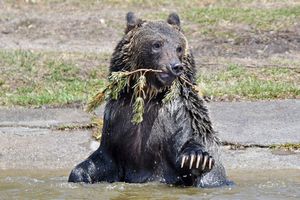 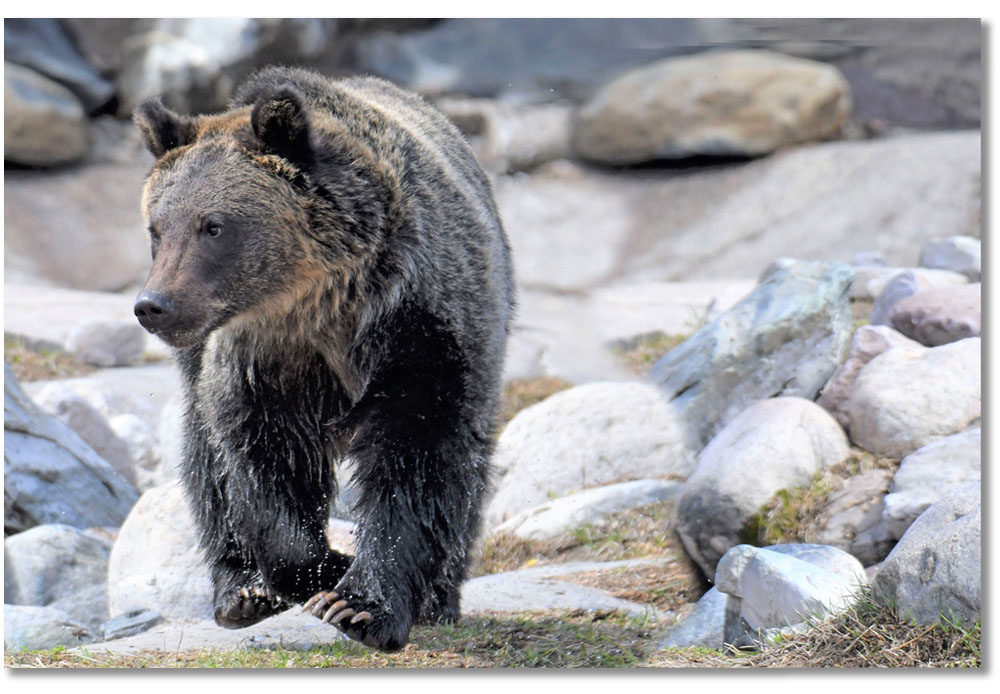 Nakina and Kobuk (who passed away in 2017) were brother and sister who were actually from a litter of triplets. Their mother and brother were shot and killed by a resident near the community of Delta Junction, Alaska. Nakina came to live at the GWDC in 1998. She will entertain herself searching out hides, fish and bones. Being from the interior part of Alaska, Nakina is about the same size as Yellowstone bears with weights between 450 and 600 pounds. 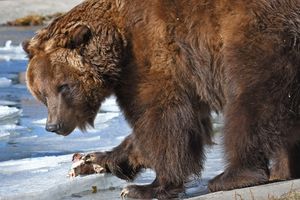 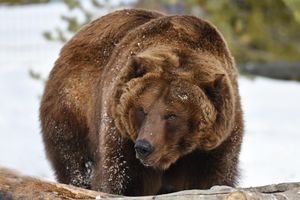 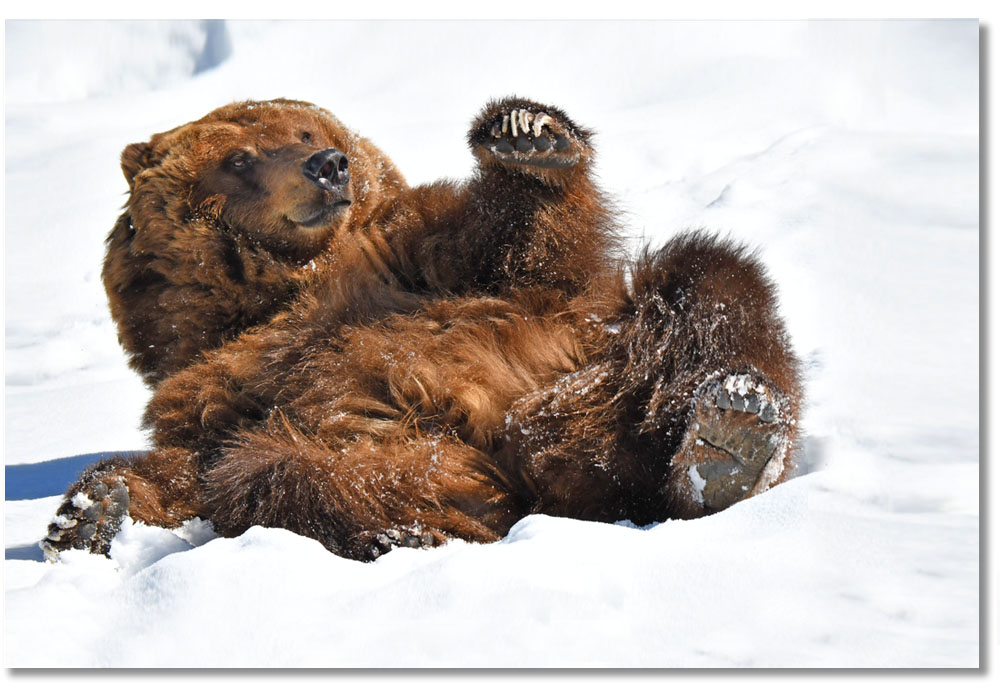 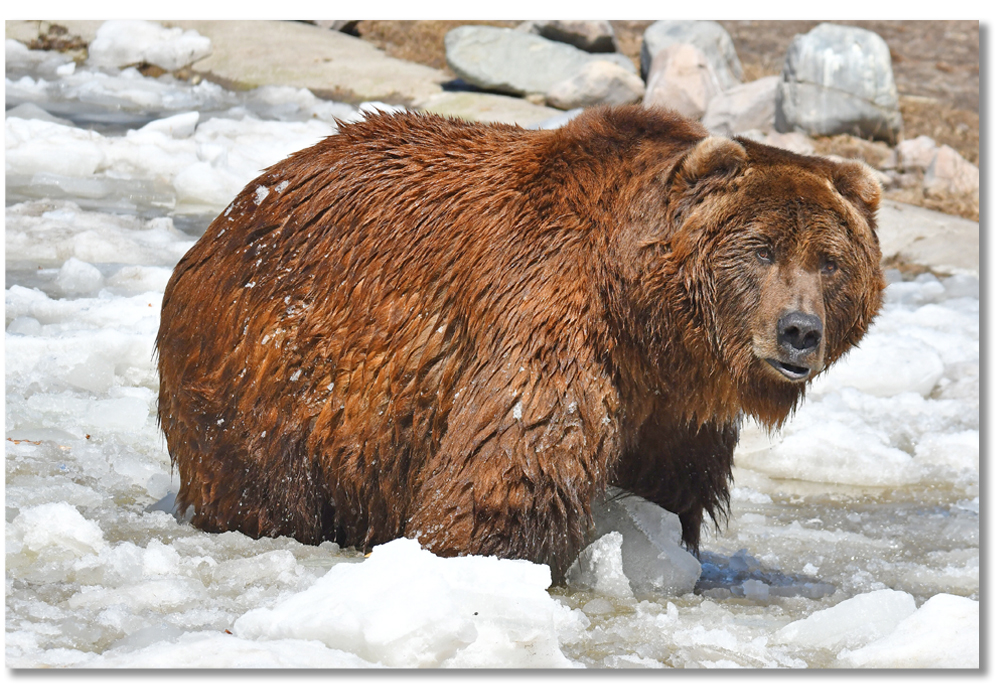 Sam was placed in captivity with his sister as young cubs, after their mother disappeared in Alaska. They wandered into a fishing village where people began hand-feeding them, becoming quite the attraction and a dangerous situation. Without a mother to care for them and becoming habituated to human food, they had to be placed in captivity and arrived at the Center in 1996. Sadly, in 2013 Sam's sister passed away. Bears are solitary creatures by nature. Sam is doing very well on his own and spends his days foraging, fishing and napping. Being from the coastline of Alaska, he is very large – weighing approximately 1050 pounds. 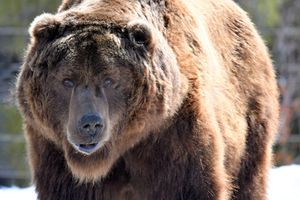 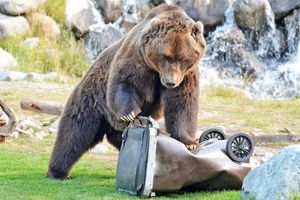 In 2002, Spirit became the first Montana Grizzly to be placed at the Center. As a six-year-old, mother of two, Spirit was known by Fish, Wildlife and Parks biologists as “Easy” because of her easygoing personality and was often seen roaming the beach or golf course near the community in Whitefish, Montana. She obtained human food and was passing on this behavior to her cubs. Although she was never involved with aggressive tendencies toward humans, it was only a matter of time before a dangerous situation became a reality. Spirit was relocated five times, but continued to return to the golf community even after intensive aversive conditioning. Officials decided to place one of her cubs at the Denver Zoo after another one of her cubs was killed by a car. At the same time, it was decided that it was time to remove Spirit from wild as well. 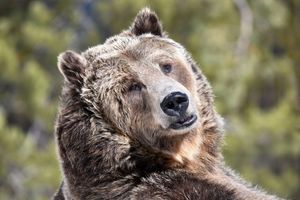 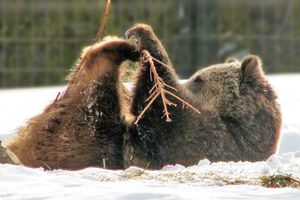 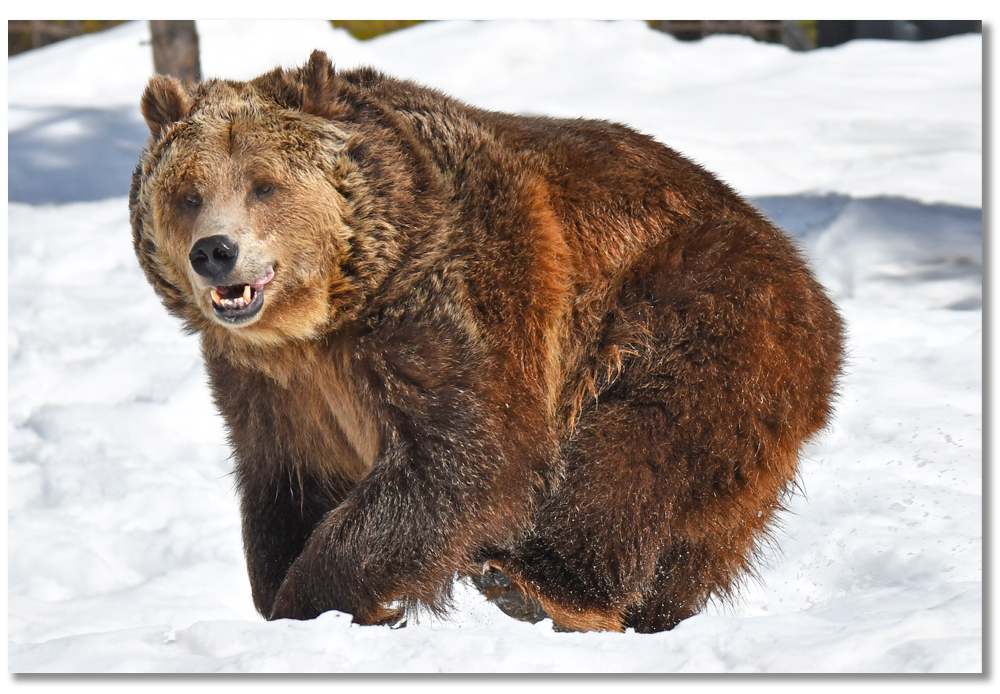